BARE International’s local philanthropy is Veterans Moving Forward, and this article is a perfect example of the impact of therapy dogs for our military.

‘With his gentle devotion to former President George H.W. Bush, the dog named Sully won a permanent place in many Americans’ hearts. But Cliff Miller fell in love with the lab years earlier.

At just eight weeks old, the pup was chosen by Miller, his partner, Patricia Summers and their community service group, Friends of America’s VetDogs, for a very important job and gave him a name with special meaning.

“When we picked him out of the litter, his hair was closest to Captain Sullenberger’s,” Miller said.

Sully was named for the man who exhibited heroism in military and civilian life when he deftly landed US Airways Flight 1549 on the Hudson River.

“We chose Sully to honor Capt. Chesley Sullenberger, not because of his ability to save all those people in landing the plane … those particular flying skills came about when he was a United States Air Force fighter pilot,” Miller said.

America’s VetDogs, the Long Island-based charity that provides service dogs to veterans, depends on donations from ordinary people. Miller’s group of 25 volunteers raises more than anyone else.

“The Vietnam vets that were returning from combat back then were not — it was actually a disgrace the way the vets were treated,” Miller said. “And now is the opportunity that we, as a group of just friends, if they need a service dog to have a better life, we can actually do something to make that happen.”

Men and women like Sharon Rinier, a nurse for 27 years who treated 9/11 victims. Soon after, she enlisted herself in the army and was assigned to an emergency room in Baghdad.

“We were having rockets and mortar lobbed in all the time,” she said. “I think it hits you a little bit later. You just become almost robotic to what’s going on.”

After 10 years in the United States Army, Rinier decided it was time to hang up her uniform and try to return to civilian life. That was not as easy as it sounds. She was placed in the warrior transition battalion in Bethesda because of a suicide attempt. Rinier struggled to function. Going out in public made her anxious. Sleep eluded her or was interrupted by night terrors. But a chance hospital encounter changed her life.

“One of the Boston bombing victims, Marc Fucarile, was at Walter Reed. He had a dog, Comrade, and he just kept coming to me … I just said, ‘I think that’s what I need,'” Rinier said.

Easier said than done. Vet dogs cost upwards of $60,000 to raise, train and care for. But she was determined.

“I wanted a dog but little did I know I was getting better because I was working towards this dog,” she said. “It was about four months after I actually retired out of the army that I got the phone call, and I was like, ‘Oh my God, I’m getting a dog.'”

That dog is Eddie. The four-year-old brindle Labrador never leaves her side.

“I could not believe that this was possible, but I have night terrors and Eddie interrupted my night terror the first night I had him and I was like in tears the next day,” she said. “If he did nothing else for me but that, life was going to be great.”

Eddie has opened up the world to her again, getting Sharon out of the house and into social situations — something she never thought she would be able to do.

As for Sully, he now works at the same hospital where a service dog showed Rinier there might be a way out of her PTSD. Sully is now a part of a team of rehabilitation dogs at Walter Reed Medical Center in Bethesda, Maryland.

Sully and the other dogs also help military beneficiaries like 11-year-old Camden McAlpine, who was diagnosed with a rare immunity disease.

“It just makes you feel a lot happier to have a dog just with you,” McAlpine said.’

Read the full CBS News article and watch the video at the source here. 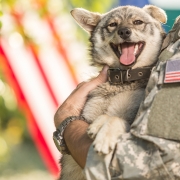