‘Not so long ago, De’Angelo Wynn was taking 11 medications for the anxiety, PTSD, and other mental-health struggles he had faced since returning from military deployment in Afghanistan. Now, he’s down to just two medications. What changed? The arrival of Jug, a Labrador Retriever who came into his life a little over a year ago. Jug is a service dog trained specifically to respond to De’Angelo’s needs by Veterans Moving Forward(VMF), a nonprofit based in Northern Virginia. Every year, VMF provides nine service dogs like Jug to veterans, at no cost to the veteran. For De’Angelo and many more, it’s a life-saving service.

De’Angelo was a Combat Religious Programs Specialist, “which, in a nutshell, is a bodyguard for chaplains,” he says. His job involved traveling with a chaplain to perform last rites on battlefields and aircraft and providing secular counsel to service members, when needed. On returning from his last deployment, De’Angelo says, “I was always on edge. I even had night terrors on occasion. It was hard getting to bed, hard going to sleep, and things like that.”

But Jug (named for the World War II airman Andrew D. “Jug” Turner) is able to interrupt De’Angelo’s anxiety even before De’Angelo realizes he’s growing anxious. “If he notices that I’m about to have an anxiety attack or a panic attack, he can interrupt that by nudging me or getting me to interrupt that by going outside,” De’Angelo says. Jug also knows when to fetch De’Angelo’s medication, and even wakes him up from night terrors by pulling off the bedcovers and turning on the lights. 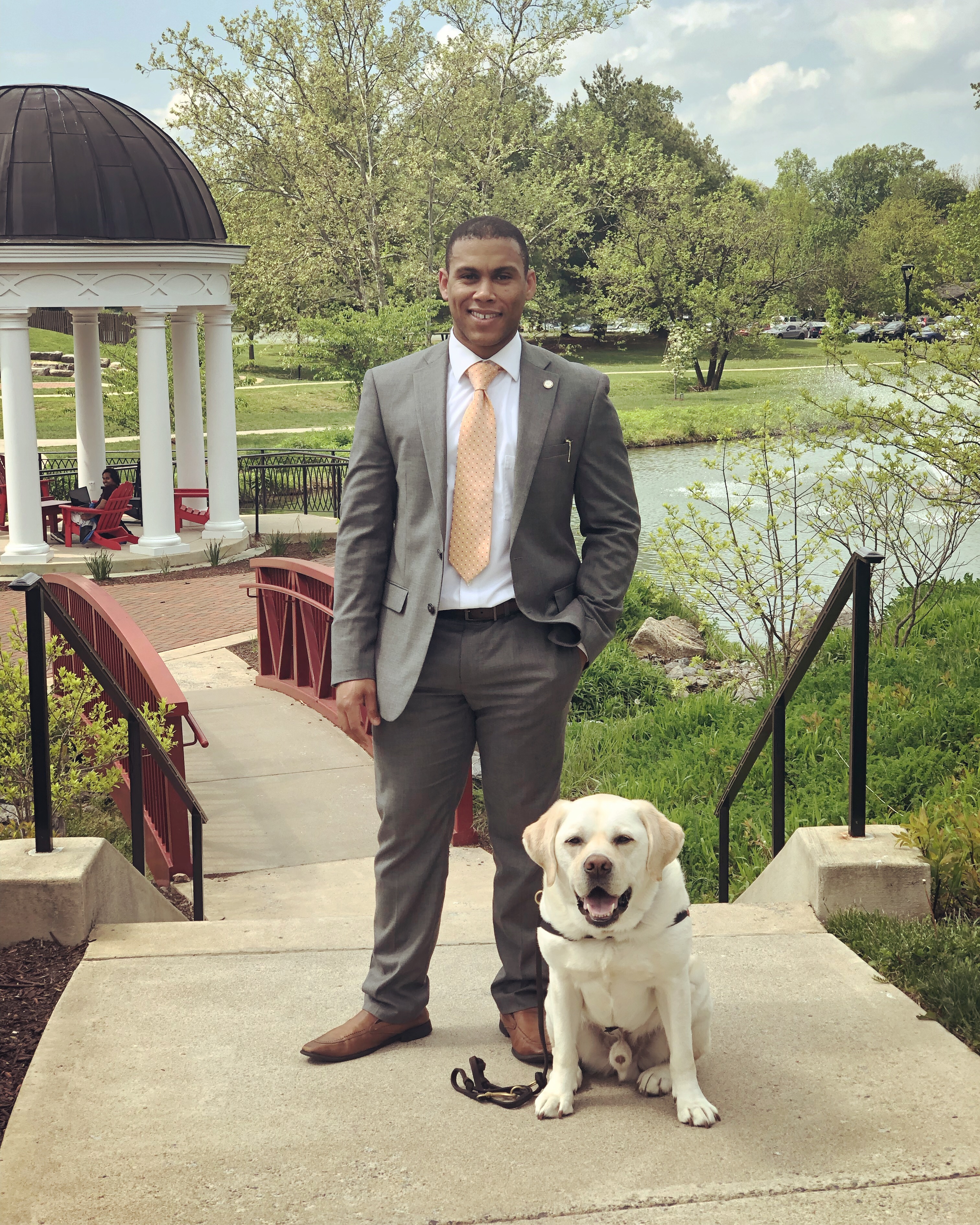 If it weren’t for Jug, De’Angelo says, “I don’t know where I would be. Actually, I do know where I would be—I would still be struggling with depression and bipolar disorder.” Instead, De’Angelo is president of the student body at Shenandoah University, where he’s studying Healthcare Management and Business Administration. He was recently chosen to travel to the United Nations Social Global Innovation Challenge at the University of San Diego—with Jug right by his side.

To JP Stevens, Executive Director of VMF and a retired U.S. Marine, stories like De’Angelo’s are proof that “dogs can do things for veterans that medicine can’t do. Nothing else can do.” De’Angelo would certainly agree—as would his fellow VMF family member Rahul Harpalani, who goes by Harp.

Harp served as an Infantry Officer in the U.S. Army, a job that saw him traveling and deploying for seven years. These days, he lives a more settled life in Cambridge, Massachusetts, where he’s studying Applied Economics and Public Policy at Harvard University, with the help of his service dog, Doug. 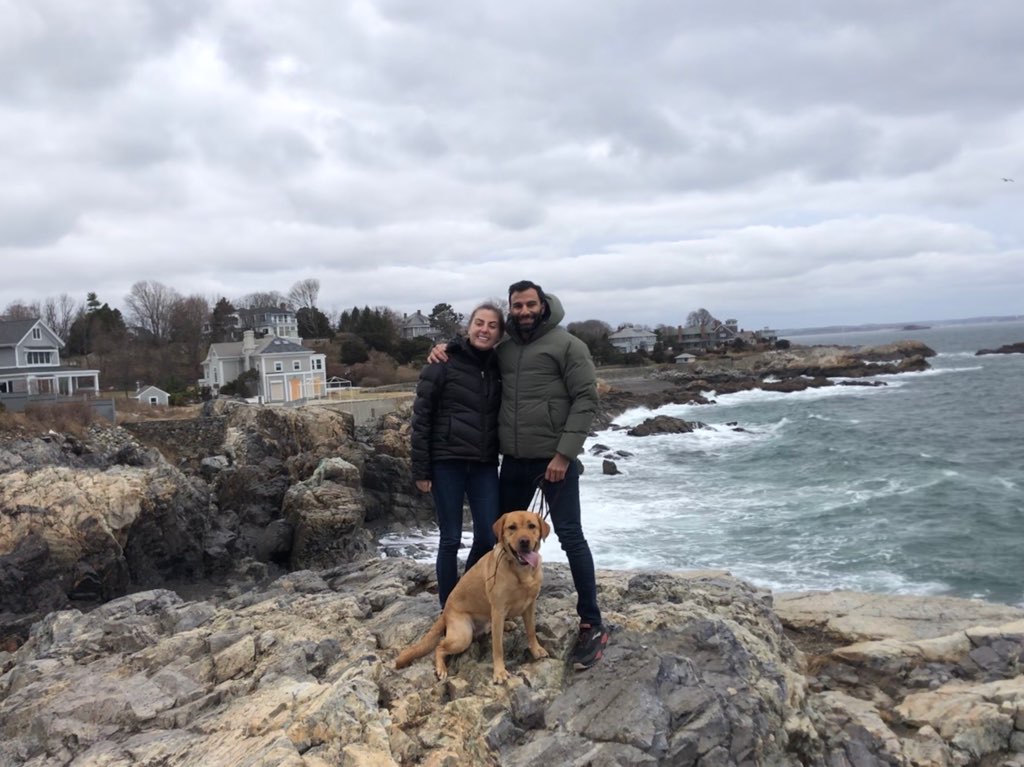 Harp and his fiancée with Doug. // Original image courtesy of AKC.

“I ended up losing my right leg below the knee in an IED blast in Afghanistan in 2010, and because of that I have some mobility issues,” Harp says. “I also have some confidence issues when it comes to tackling very difficult climbs or long walks.” Harp’s dog Doug—also a Labrador—is trained to help with those mobility issues, making daily life easier by retrieving items around the home, such as dropped wallets or—clever boy—his own food bowl at mealtimes. And like Jug, Doug is a major source of support and confidence for Harp: “Without him, there would be a huge void in my life,” Harp says.

And when Harp proposed to his fiancée during a recent hiking trip in New Hampshire, Doug was right there, helping him up the mountain.

What Goes Into Training a Service Dog for a Veteran?

Seeing the astounding difference a service dog can make in a veteran’s life motivates the whole VMF team to pour time, love, and extensive resources into each and every dog they train.

Specifically, each dog VMF places with a veteran costs around $25,000, from finding the puppy through several years of training. During training, every dog lives in a home with volunteer trainers, whom JP Stevens describes as “terrific people. Fantastic people… The greatest people in the world.”

Among the many things that set VMF’s work apart is the level of tailoring it provides in training dogs for specific veterans. The veterans the organization works with have wide-ranging needs: some have physical limitations, while others might be struggling with a traumatic brain injury or with their mental or emotional health. Each dog is trained to a basic level, then matched with a veteran to ensure a true personality match. The remainder of training is targeted to the specific veteran’s needs—for instance, one dog is trained to help his handler get undressed for the shower, while another can open the refrigerator and fetch bottles of water to help his handler take medications.

And VMF’s work doesn’t stop once a dog goes home with a veteran. “VMF establishes a lifelong relationship with you and the dog,” Harp says. The organization is always on-hand to offer follow-up support for dog and veteran alike, as well as establishing relationships with veterinarians and other providers in the area, to help veterans take care of their dog.

Once a service dog is no longer able to perform their duties, VMF supplies another service dog, allowing the first to retire and live out the rest of their days as a family pet. “We call our veterans a family. We take care of them for life. Whatever they need,” JP says.

How You Can Help Provide Service Dogs for Veterans

VMF doesn’t charge its veterans anything for their dogs, and doesn’t receive any government funding. The $25,000 it costs to train each dog—plus the cost of follow-up care—is provided solely through donations and volunteer work. And though VMF currently provides around nine dogs a year, in a nation where 20 veterans die by suicide each day, there’s an almost unlimited demand for service dogs. “We hope in the next four years we’ll be putting out even more dogs. It’s unlimited, we’re talking about looking at 50, 100, 150 dogs, whatever we can do,” JP says.

That could be hundreds of lives saved every year. De’Angelo says: “Truly, when I thought that my proverbial world was crumbling in, Veterans Moving Forward was able to step in and help me to navigate a path to where I could find hope. I just cannot thank them enough for what they’ve been able to do for me. If there’s anything to take away from my experience, it’s that they saved my life, literally.”

To help train more dogs like Jug and Doug, you can make a donation to Veterans Moving Forward and other organizations that help veterans get access to service dogs. 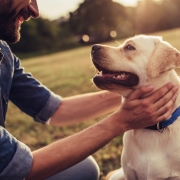 #BAREFactFriday 💼 Do you think your work habits

⚠️ Be careful! Scams are circulating around an

#TestimonialTuesday 💬 Don't hesitate to ask us

On this 20th Anniversary, and every day, we never

#BAREFactFriday 🍽️ What have you been doing a

🧐 Are you a good fit for our contract-based #In

#TestimonialTuesday 💬 Want to learn more about

#BAREFactFriday 💻 Many have been on their compu

#TestimonialTuesday 💬 The dedication at BARE is

🤔 We're looking for individuals to apply for ou

#BAREFactFriday 😤 When was the last time you co

👋 We are looking for an independent contractor

#BAREFactFriday 📱 #Mobile #experience can be a

#TestimonialTuesday 💬 To thank our team members

This should be an exciting match... We'll be rooti

Flexing Your Professional Reputation as a Mystery Evaluator